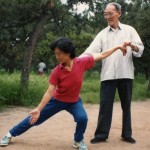 Li Tianji started training in Chinese martial arts as a young child and graduated with honours in his training. He became a martial arts lecturer at Harbin University and the coach of the first national martial arts team of the People’s Republic of China. He is regarded as one of the “Ten Best Wushu Masters of China”, and is acknowledged as a “People’s Republic of China Sports Pioneer” to the point that tai chi chuan competition-forms in China had to be previously approved by him.

In 1956 Li Tianji was one of the main creators of the first standardised simplified 24 tai chi chuan forms and created the 32 tai chi chuan sword forms. He also polished the 24, 88, 48 forms and the international 42 competition forms.

He earned the title “Father of Contemporary Tai Chi Chuan” and the nickname “Long Fei”, meaning “Flying Dragon”, because of his outstanding aptitude. 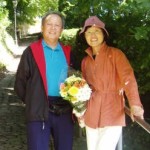 Professor Li is one of the main creators of the compulsory routine of 42 tai chi chuan forms, which became the first internationally standardised Tai Chi Chuan competition routine.

He has been the Vice President of the Chinese Wushu Association for many years and also served as Chief Judge at the 11th Asian Games. He teaches tai chi chuan all over the world, including at Bao’s Lung Fei Tai Chi, through his friendship with Bao and Men. 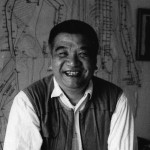 Naijian Bao’s father and grandfather were both martial arts masters and he followed in their footsteps. At the age of 14, he took up gymnastics and, in 1956, with a good foundation from his martial arts training, he became the first leading gymnastics champion of China, and is acknowledged as a “People’s Republic of China Sports Pioneer” .

After retiring from competitive gymnastics, he became the chief coach to the Chinese National Gymnastics team, and also coached the national teams of North Korea, Indonesia, Iraq and Iceland.

Naijian Bao had the distinction of being number one ‘Master of Sports’ in China and had, amongst other qualifications, a degree in sports science.

Traditionally in China, martial arts and traditional medical treatments were taught together, so that injuries incurred through martial arts practice could be treated directly. Training also included tai chi chuan for maintaining good health. Naijian Bao learnt all these aspects and helped many family members and friends during his career.

When he retired from gymnastics, he opened a complementary clinic and built an excellent reputation, with his practice of Traditional Chinese treatments attracting clients from a wide area across the South West of England. In 1987, Naijian Bao and his wife Men Bao, started teaching tai chi chuan in the UK. 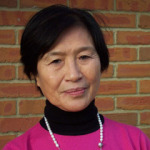 Mrs Men Bao was the first Chinese National Games balance-beam champion and is acknowledged as a “People’s Republic of China Sports Pioneer” and has won many gymnastic competitions in China. She was given the title of ‘sports master’ by the Chinese authority.

Because of her exceptional skills and gymnastic foundation, she was asked by the famous Li Tianji (Long Fei), with whom she worked in the top Chinese authority department of the National Sport Centre, to train in tai chi as he recognised her qualities to be an excellent tai chi student.

Since first starting Bao’s Lung Fei Tai Chi with her husband Naijian Bao when they moved in 1987 from China to the UK, Men has trained many tai chi teachers, who now hold classes of their own, further promoting tai chi in this country. Zabeth is one of Men’s trained tai chi teachers in the South West. 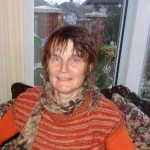 Following several years as head-coach for Mrs Men X. Bao, founder of ‘Bao’s Lung Fei Tai Chi’, Zabeth continues to promote her own Bao’s Lung Fei Tai Chi club and has trained Anne, Bev & Monica as teachers to run their own club classes within Somerset and Dorset. Their contacts can be found on the links page. 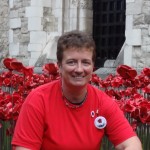 Anne found herself “hooked” on tai chi having attended a “taster” class back in September 2006. As her interest grew, she began to attend two classes a week and has, over time taken the necessary gradings to qualify as a tai chi teacher.

Anne states that learning tai chi has improved her quality of life, kept her grounded and level headed to deal with life’s challenges.

Anne has fully trained as a First Aider and is currently taking a pause from teaching due to full time studying at University to graduate as a paramedic.